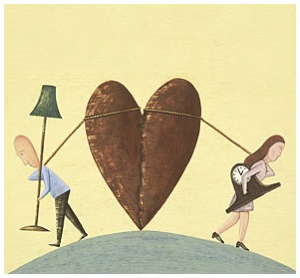 Are there any winners in a divorce?

When people decide to make the emotional and complicated choice of perusing a divorce, many believe that divorce is a game that they can win. We live in a society which pushes the concept that people are either winners or losers. Competition is excessive in a capitalist society. Competition between family members and siblings creates rivalries and also negative feelings between people who love each other.

Divorce is a failure of two people who once loved each other and now are prepared to break their bond and live separate lives. Depending upon the length of the marriage whether or not the parties have children, the emotional harm can be much greater.

In a short marriage in which there are no children and no property, both parties come out equal. The husband and wife both realized that they were incapable and that their marriage was a failure. These divorces are considered simple and uncontested but I argue that neither of the parties are a winner because their marriage failed.

In a marriage where their is property and debt in dispute. The parties can either agree to divide up there belongings equally or fight to get the things that they want from the marriage. If an agreement is reached between the parties, than both parties can claim that they have won because the costs of fighting to divide up there belongings usually will cost more in attorney's fees then the value of the items in dispute. Additionally, divorces that end with an agreement are usually quicker and less expensive.

Divorces involving children are the most emotionally stressful everyone in the family is impacted by the parents choice to get a divorce. Many people live together and they are unhappy but they remain together because they want to see their children on a daily bases and this could not be accomplished if the parents lived in separate homes. Fighting for custody of children creates bitter disputes and in many times the children are caught in the middle the emotional harm caused to the children by this type of litigation stays with them for their entire lives. Custody disputes cause the parents and their lawyers personally and emotional involved. The parties attack each other on a personal level naming all the things that they feel are wrong with the other parent. It is very difficult to imagine a winner in this process because, after the fight is over the parties have no respect for each other and will have nothing but negative feelings after the personal attacks by there formal spouse. The children also sense this, when they travel between the two homes of their parents.

Child Support in a divorce, also creates conflicts between the parents. Both sides feel that they are being treated unfairly and this creates a great animosity between the former spouses.

Marriages that last a lengthy period of time are also extremely harmful to the emotional well being of the parties. In these instances the parties believe a large portion of their lives have been wasted. They also believe that the best years of their lives were committed to a person that they believed they would spend their entire life with and ultimately the parties were wrong.

In conclusion, divorce is a necessary choice for people who are unhappy or have been mistreated in someway by their former spouse. It is important to select an attorney who understands the emotional harm and pain that is involved in the divorce process. There are no winners or losers in a divorce. The goal is to resolve the problem as quickly as possible and at the same time trying to limit the emotional damage to the husband and wife and children if there are any. If you hire me, then I will strive to explain every aspect of the divorce process and try to resolve the process in a way that allows the individual to move forward after the divorce with the least amount of aggravation as possible.